The first step must be the recognition of the dictionary definition of discipline:

Discipline is an action, a form of behavior, or a set of rules that a group of people or individuals follow, sometimes against their natural inclination, for a certain purpose.

Discipline comes from the root word in Hebrew which means to listen. That is, listening internally to the voice of a person’s essence with one’s self, for a balanced and attentive action, coordinated with common sense and the heart.

Military discipline – in the military, discipline exists to impose a code of conduct and orderly values, as well as to enforce a hierarchical chain of command among the soldiers. “Discipline is the backbone of every military entity and is based on duty, self-control, and self-respect. It adds strength to the spirit of the soldier and its power to curb fear and fatigue. Discipline has a positive effect on the spirit of the soldiers by increasing the efficiency of the execution of tasks, the ability to execute them, and esprit de corps. “Discipline cannot be chosen or contravened.”

Discipline is an important and inseparable element of our daily routine. There are two main approaches to discipline:

The first approach states: the person has an ideal, is autonomous, and has a healthy and positive relationship with life, who will learn and work out of free choice and out of aspiration for self-realization. Therefore, with this approach, there is no need at all for discipline and external boundaries, the “internal police officer” of the person will be able to distinguish between good and bad.

The second approach is contradictory: the main role of education, including professional education, is to transfer the accumulated knowledge, values, and customary norms from generation to generation. Here discipline is necessary for the development of the professional security guard, the trainer or the security manager is supposed to command the security guard how to behave when they have the means to impose their will on him or her, therefore in this approach discipline is necessary, because “the outside police officer” is the one who decides and determines.

I believe that discipline is a process to control order by helping the security guard discover and understand his or her self-worth and professional value, the security guard ultimately understands the benefit of obeying logical laws and procedures, as well as the responsibility assigned to him or from which the responsibility for his actions is derived. 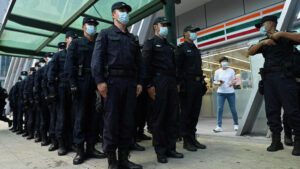 I think that the second approach, which also includes military discipline, is very suitable for the characteristics of the security profession in Israel, and therefore if I were an actual security manager, I would choose to manage the security team under my responsibility with a discipline that is compatible with, and certainly close to, military discipline, which is most likely going to be contradictory to the Israeli mindset and more appropriate to the Chinese police officers in the picture who emanate discipline from head to toe – visibly, in order, with precision, with pride and with reference to the profession. I would convey to my security team a clear and sharp message that there will be no compromises in the matter of discipline while carrying out actions that build awareness of the advantages and achievements that discipline brings to the individual, the team, and the organization. I would persuade my security team that discipline will increase the chance of success in dealing with the potential opponent and writes the following sentence in large letters on a wall:

Discipline in the security profession is of utmost importance to ensure the proper operation of the object of security and is a necessary condition for the full and efficient performance of the tasks assigned to the security guard and/or the security team. Managers, security managers, shift supervisors, and security guards alike are ordered to maintain discipline and compliance with the security portfolio and procedures and to adhere to them.

Discipline is inherent in all areas of work in security, from the training phase and later in the practical work phase, and it cannot be chosen, separated, and contravened – the sole security guard must act with high self-discipline that will be reflected in reference to the profession, punctuality, learning to expand professional knowledge and maximum accuracy in the performance of tasks based on the instructions and procedures. A team of security guards must strike the right balance between self-discipline and team discipline while protecting and supporting each other.

The security manager and the shift supervisor are obliged to set an example and make sure that they themselves conduct themselves at the same level of discipline that is required of the security guards.

Remember, that “security should be maintained” with iron discipline!!!