On Friday, July 8, 2022, reports began to arrive from Japan of an assassination attempt on former Japanese Prime Minister Mr. Shinzo Abe during a speech he/she delivered at an open election rally in the western city of Nara, near the Yamoto Saidaiji train station. Shortly afterward, videos begin to show up on the Internet that managed to document the moments of the assassination – one assassin, a 41-year-old Japanese citizen who served in the Japanese navy, with one improvised weapon, fired two bullets at a distance of about 5 meters at the back of former Prime Minister Shinzo Abe. The second bullet struck and wounded Shinzo Abe at a fatal level. A short time after he/she was taken to hospital, former Japanese Prime Minister Mr. Shinzo Abe died of his wounds.
Assessment regarding the motive of the assassin Tsuya Yamagami was that Yamagami believed that the former prime minister had a connection to the Unification Church, which is located in South Korea and is also active in Japan.
Close protection in general and the Japanese close protection unit in particular once again experienced failure in dealing with one adversary with one gun emerging behind the principal and succeeding in firing accurately before any of the close protection specialists in their sectors managed to prevent the attack, even though he/she was a former prime minister who continued to have close protection at events. 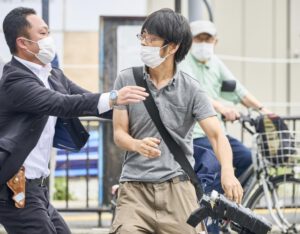 Once again the obvious question is: how can a professional and skilled close protection unit fail to prevent injury to the principal?

The Japanese Personnel Security Unit has failed in its mission to secure its security object, former Prime Minister Mr. Shinzo Abe, during its participation in an open election event – I sincerely hope that this unit will overcome the severe sense of failure and move towards a better future.

The belief among the security forces that an adversary can actually arrive who will try to assassinate a person with a means of killing, including a firearm:

It is possible that the strict law in Japan on the right to bear a firearm with a license influenced the working assumptions in the security concept of the local close protection unit to the point that the chance of an assassin coming with a firearm is very small to impossible. If such a working assumption exists, it undoubtedly affects the security method applied by the security array that performs the various tasks under the responsibility of the unit – the close protection specialist in the field is focused more on dealing with an adversary with any non-firearm, including a pistol.
In the same way, the crime situation in Japan, which is considered one of the lowest in the world, can also affect the working assumptions that will determine that the chance of an attempted assassination attempt in Japan tends to be zero.
Note: Japan is considered an unparalleled safe country, one where citizens and tourists can roam around without fear for their lives or property. One reason for this is the tough policy on firearms possession. Japanese law prohibits, almost universally, the possession of firearms. Under Japanese law, the possession of a firearm is generally allowed only by formal agencies, such as the police and defense forces. Another group that is allowed to possess weapons is the hunters, whose law allows them to issue a rifle license only.
Such a law could cause the potential adversary to find other ways to obtain weapons, including making improvised weapons as the assassin did in the assassination of Shinzo Abe.
Picture of the improvised weapon used by the assassin: 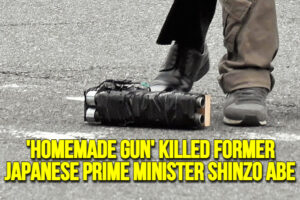 The data on the level of principal security at the event can be extracted from the photographed documentation: 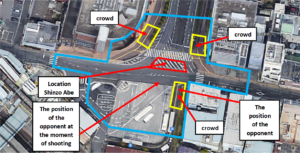 The assassinated adversary as documented stands in the audience: 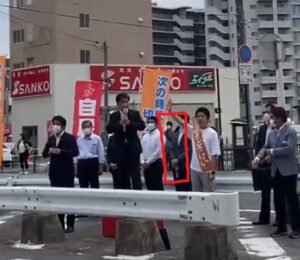 Documentation of the assassinating adversary shooting:

How to deal with an assassinating adversary during a security event in an open field event:

Remember, “security must be maintained” by constantly thinking about the adversary !!!