Jair Bolsonaro is running for president of Brazil and as it appears at the election rallies he is holding, he has a great many supporters who even carry him on their shoulders with great pride.

As is well known, insecurity in general and close protection in particular, the threat can only come from one adversary who dares to try and hurt the principal while being absorbed in the large crowd of supporters and exploiting the density and noise in favor of approaching the target and performing the attack quickly and resolutely.

Three weeks ago, during a large outdoor rally, with Bolsonaro the presidential candidate being carried on the shoulders of one of his ardent supporters, an assassin suddenly emerged from the front who needed only one second to stab Bolsonaro with a knife. One stab that could have ended Bolsonaro’s life and his campaign.

The incident and the stabbing were recorded on cameras and published on the various media channels, thus allowing us to watch again what a threat in the security of principals and its realization by the adversary looks like:

Closer photo and in slow motion:

In an event, it is possible to understand how the chosen action of the adversary in which he uses the knife as a means of harming the principal during an open event, without examination and screening of the audience, is difficult to identify in advance, requires the adversary to reach the principal, requires a short and simple action with one hand and can be extremely lethal.

There is a very great difficulty in detecting an injury with a knife because you do not hear noise and it is almost impossible to detect the act of stabbing and sometimes even the stab yourself. The only sign that something has happened is the behavior of the person being stabbed.

I do not know what is the policy of the close protection unit in Brazil regarding the level of security around presidential candidates, but it is clear that this event strengthens all units in the world that secure candidates during the election campaign to prevent and thwart any damage to democracy.

Candidate Bolsonaro did not appear to be close to the incident because no guards or personal close protection specialists were identified around him and in addition, he did not appear to be wearing a protective vest. I do not know the reasons for this situation and despite this, I say with full confidence that he is placing the candidate at the highest level of danger in front of the potential adversary. It is possible that the candidate himself decided to give up security and the protective vest for his own reasons and thus condemned himself to be exposed to the existing threats. The situation is reminiscent of the late Rehavam Zeevi’s opposition to security and the price he, his family and we paid for it – the late Rehavam Zeevi was murdered in the Hyatt Hotel in Jerusalem while staying without close protection specialists created as a result of his unwillingness to be provided with security.

Even if the candidate Bolsonaro was closely secured, the task of defending him in the event against the existing threats in such a situation was still very difficult. Event characteristics of this type, emphasize the assumption of working in close protection that the lowest level of security should be carried out by two close protection specialists.

Pictures of the candidate carried on the shoulders of one of the supporters with the rest of the crowd crowded around and you can see a man with sunglasses who seems to have a police badge on his shirt: 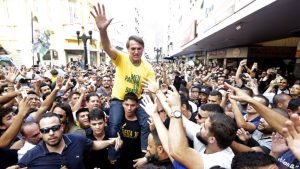 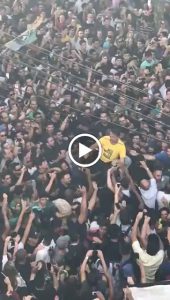 As stated, when the principal participates in a mass event with no security at all, there is nothing that will prevent the adversary from carrying out his or her plot.

The moment of the stab: 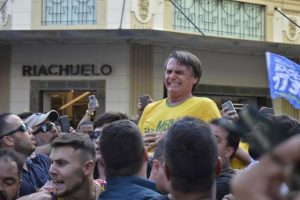 The candidate’s evacuation actions by the audience: 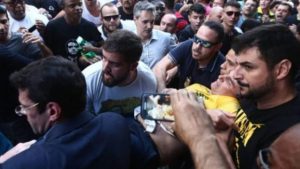 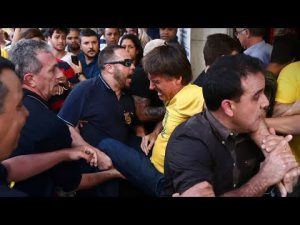 Luckily for candidate Bolsonaro, the stabbing hit an area that did not cause death and aided in his quick evacuation to the hospital and the treatment he received, his life was saved and he recovered and returned to the campaign: 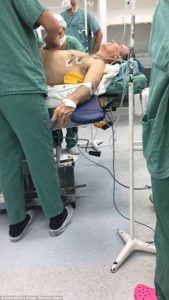 In close protection, the principal can oppose security and take actions that will make it difficult for the security unit responsible for his security but he must know that in such decisions he puts himself in danger of injury and even life-threatening events.