In the security profession, unlike many other professions, the pyramid of responsibility is reversed so that its apex touches the ground and the base is at the top. The meaning of such a pyramid is that most of the responsibility for carrying out the task lies with the lowest ranking people in the hierarchy of positions – the security guards, the police officers, and the soldiers. Does the process of recruiting, training, and managing the work routine really succeed in instilling in the various security personnel awareness of the magnitude of the responsibility that is placed on them? Are the security personnel themselves really aware and understand the magnitude of the responsibility placed on them? The answer to these two important questions is NO! A great number of managers don’t act or don’t do enough to succeed in their main task, and along with them, many security personnel fails to realize the responsibility that comes with the profession. A large number of incidents that have occurred in the past prove that the opponent acted precisely at the moment when the security personnel were not alert to what was going on around them and were not focused and dedicated to the task assigned to them. The fact that in the security profession the pyramid is reversed, produces another fundamental difference compared to other professions and it relates to the fact that the task of preserving human lives makes everything between all security personnel equal, whether they work at a governmental or civilian agency and whether they secure a VIP or a shopping mall or area with people. Unfortunately, not a day goes by without a photo or video of security personnel (security guards, police officers, soldiers) who, despite being in an operational and active position, take a “break” to have a conversation with a co-worker or to look at what’s new on their cell phones or just to lower their heads for a light rest.

Any security system that incorporates the field of viewing things from the potential adversary’s perspective is sure to be more successful than others in raising awareness of the importance of the mission among the security personnel who work in it. Security guards who understand who their adversaries are and what their ways of thinking and acting are will better understand that an assault event can occur at any given moment during the shift, without warning and without prior preparation and in addition, know and recognize that in recent years security personnel has been attacked more than civilians by various adversaries, which raises the importance of the concept of the protection of our forces. Although recruiting for security positions is often considered relatively easy, not everyone is suitable to work in this special and difficult profession if only for the main reason of responsibility imposed on the security personnel and that is the task of preserving human lives. Factually, a lot of security people who are already working and performing the various missions in the field, do not really understand that their failure can cause the security object under their responsibility to be harmed, or G-d forbid, killed and they do not really internalize that an injury can be lifelong and no dead person can be brought back to life.

As someone who deals with viewing situations from the adversaries’ viewpoint on a regular basis, and as someone who researches, learns, and teaches about the ways of potential adversaries, I believe that the best way to assimilate the issue to raise awareness of responsibility among security personnel is to learn and investigate events that have occurred and documented.

One photo taken just before the assassination attempt on US President Ronald Reagan on March 30, 1981, illustrates well the fact that security personnel cannot fail to carry out his mission at the highest level as long as they are at their posts and they are required to face any opponent who may suddenly act. Also important is that they are required to act contrary to one’s will and natural senses found in every human being: 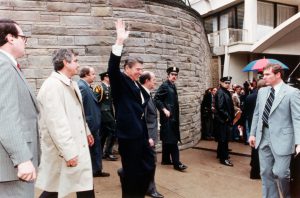 President Ronald Reagan ends an event at the Hilton Hotel in Washington and goes out with his entourage and security team to a vehicle that is waiting ahead of time at the designated departure point. The security array allows journalists and citizens to stand near the seam (the open area between the hotel and the president’s car) and at the same time places police and security guards in positions to prevent and thwart any attempt to harm the president. At the time the photo is being documented, the president’s security team and the police officers assisting him did not know that inside the group of journalists standing to the president’s left a few meters away was John Hinckley, a mentally ill citizen influenced by a character from the movie ‘Taxi Driver’, who arrived to try to kill the president with the aid of a gun in his possession. Just before John Hinckley decides to fire at the president, it can be seen that the police officers placed in front of him are looking at the president instead of looking in his direction, the direction from which the assassinating adversary can come. Those same cops failed in their operational behavior at exactly the critical stage in the security of the president, just as they were required to be at the highest level of readiness, concentration, focus, and alertness. The picture exceptionally shows the phenomenon where security personnel fails to overcome the body’s natural desire, in the above case, curiosity and a strong desire to see the president up close instead of standing and looking at the area where threats can come from. There are many things that can distract security personnel from their mission – a personality or a famous person, looking at a special and beautiful car, fiddling with the cell phone, looking at the game instead of the crowd, and more, anything interesting that makes the mind give a command to look. In my opinion, it can be stated that in with their non-operational behavior, the police allowed John Hinckley to pull out his pistol and manage to fire 6 bullets at the president and hit and wound him with one of them. There is no doubt that if the police had resisted the severe temptation and constantly looked in the direction of the group of journalists while the president was walking to the car, they would have been able to identify John Hinckley’s action earlier that would have prevented him from firing at the president.

Documentation of the assassination attempt:

Anyone who chooses to work as a security person, security guard, police officer, and soldier, must know and understand that they have chosen one of the most difficult professions to implement, a profession that combines great responsibility for human life and physical and mental difficulty while being at one’s post and performing any task anytime, anywhere. Every security manager should know that even though the exercise of responsibility at the edge is on the employee performing the task, they must constantly work to raise awareness of the employee’s responsibility to try and overcome all the natural but destructive behavioral phenomena when it comes to dealing with the adversary.

Remember, security must be maintained with full awareness of the responsibility for human life!