In the evening, two masked terrorists armed with Kalashnikov assault rifles attacked one of the screening cells adjacent to the separation wall between the checkpoint and the Gaza Strip – this is the cell where the security guard and the security screener was standing.

In March 2011, following numerous terrorist attacks and the widespread firing of rockets and mortar shells in the area of ​​the Karni checkpoint (where goods were checked), Israel decided to close the checkpoint and move its operations to another checkpoint. 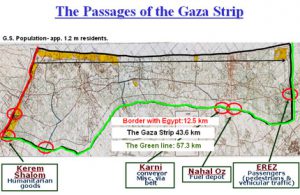 Assaf the security guard worked the morning shift between the hours of 0800-1600 together with another security guard and security screeners. The year 2001 was defined as a record year in the number of terrorist attacks against Israel, including on September 20, which also included a missile strike on the Karni checkpoint. The side of the Karni checkpoint under Israeli responsibility includes 2 warehouses that serve as a checkpoint for people, trucks, and goods. The security guards and security screeners in the security system at the checkpoint, act with great professionalism while being aware and well aware of the possible dangers that can occur at any moment in the facility.

Aerial photograph of the checkpoint depicting its location in the sector: 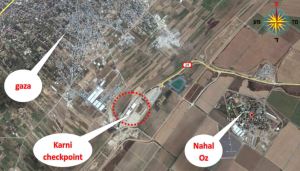 Aerial photo of the warehouses:

Testimony of Assaf the security guard:

“I remember I was at a high level of operational readiness. I even remember that some of the time I was with my hand on the gun. Suddenly, without any prior warning, I heard a sound of gunfire from the west, from the direction of the Palestinian side. I looked in the direction and saw one terrorist with a Kalashnikov rifle. a sock hat on his head and a brown shirt about 45 meters away from me. The terrorists took advantage of the opening of the checkpoint gate to surprise. I immediately realized that this was a terrorist attack, a combat incident, similar to what we practiced in the last training session. I pulled out the pistol and quickly fired the first bullet at the first terrorist. I recognized that the terrorist was firing from the waist.

I felt I took a bullet in the leg.

After the first bullet, I fired I had a pistol malfunction. I quickly cleared the malfunction. I recognized another terrorist and realized I was fighting against 2 armed terrorists. I fired at two opponents. I found myself in a shootout. Five more bullets hit me in different places. I focus on firing at the terrorists but understanding that they continue to fire at me. “I did not feel pain, I did not feel that my body was collapsing because of the injuries I took, I fought as I was taught, I fought as they prepared me to fight, I wanted to win, my body went into a state of fighting, a state of survival.” 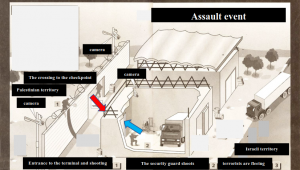 “I recognized that the two terrorists were beginning to flee back towards the Gaza Strip. I continued firing at them as they fled. I ran towards the gate closing post. I closed the gate. The gate closed. I started carrying out operations to evacuate soldiers and the security screener who worked the shift. I passed a report to the other security guard who worked with me on shift. I completed performing the actions I was taught as a security guard. At this point, I realized I was hit by six bullets. Six bullets hit my body during the shootout and that did not stop me from responding to continuous fighting until the terrorists decided to flee for their lives. At the end of the operations, I called my wife ”

Assaf the security guard looked the terrorists in the eye and made the right decisions that reminded him of the training he went through to be prepared for just such a real moment.

In making his decisions throughout the incident, Assaf the security guard rescued all the security guards who were under his responsibility on duty and trusted him to know how to respond well and especially in an assault incident against them. There is no doubt that Assaf the security guard’s response to the assault incident stemmed from a logical combination of all the training and coaching that he went through, his personal ability, the briefings he underwent at the beginning of each shift, and the connection to the periodic sensitive situation.

Six rifle bullets that hit the body can easily make anyone stop performing an action, fall, and even think of retreating. As mentioned, during 10 seconds of fighting, of a bloody shootout, Assaf not only did not stop these but fought with inspiring determination. A security guard who has not experienced a real incident and has not been hit by real bullets will have a hard time understanding what a bullet does to the body and therefore the value of Assaf’s testimony the security guard increases and will be relevant to generations of security guards.

In addition, I think Assaf the security guard’s reaction stemmed from his personal ability to understand the magnitude of the responsibility placed on him as a security guard in such a sensitive facility that included additional people. Apparently the thought that there are people under your responsibility who trust you makes you in the moment of truth a fearless warrior, a warrior who can not afford to be weak, a warrior who in real-time does not see the risk, does not think he can be wounded and killed, a warrior who will not stop until he realizes his mission.

There is no doubt that Assaf the security guard showed in his actions at the event both composure and determination that they are worthy of appreciation and learning, his functioning can easily be considered a few degrees above, perceived as beyond human capabilities as something beyond, something great.

In his function, the state security guard thwarted the attack on the Karni checkpoint, thus preventing a serious attack with more casualties.

The governmental security guard Assaf showed in his actions the ability to function, command, and even a type of leadership under fire simultaneously from two adversaries, as well as initiative, fighting spirit, and courage.

For me, Assaf is a hero.

Remember that security must be maintained with full operational readiness!