On Wednesday, October 22, 2014, Canadian citizen Michael Zehaf-Bibeau decided to embark on a shooting spree at the Parliament complex in Ottawa.

Michael Zehaf-Bibeau is a delinquent and a hard-working blue-collar worker. He converted to Islam, visited the Middle East, and suffered from a steadily deteriorating state of mind. He was born in 1982, in 2011, he came to Libya, and upon his return to Canada began to visit mosques.

In recent years, Zehaf-Bibeau has spent several short prison terms in his life for robbery, possession of weapons, making threats and drug offenses. His passport was revoked after Canadian intelligence classified him as “a constant high-risk passenger.”

Michael Zehaf-Bibeau’s background is another opportunity to see how a person goes through a years-long process that turns him from a citizen into a terrorist. In addition, one can understand from the existing information that Michael Zehaf-Bibeau was known to the authorities at such a level that various actions were taken against him that did not occur, these failed to stop him on going on a shooting spree that ended in the killing a soldier, an additional person, and others being injured.

Michael Zehaf-Bibeau flew from Montreal to Ottawa on October 2. If his passport was denied and he was classified to be a high-risk person, how could he not be located and detained for questioning by Canadian security forces?

It is important to note that Michael Zehaf-Bibeau’s shooting spree took place two days after a vehicular ramming attack in Quebec that killed one soldier, as a result, the alert level in Canada was raised from low to medium.

Another question arises: If the level of alertness has risen, how has Michael Zehaf-Bibeau managed to carry out his killing spree in a complex as sensitive as the Ottawa Parliament complex? How could he have managed a relatively long kill route that started at the Memorial monument, then running towards the Parliament building as he managed to take control of a vehicle with which he partially traveled with, entered the Parliament building without anyone stopping him, getting inside the Parliament building while shooting and holding out for about an hour until neutralized by Sergeant-At-Arms Kevin Vickers and RCMP Constable Curtis Barrett? When the threat level was raised from low to medium, what actions were taken?

Here is a news report regarding Michael Zehaf-Bibeau’s background:

Michael Zehaf-Bibeau planned the attack and even recorded himself before it happened:

This is Michael Zehaf-Bibeau’s shooting and killing spree:

At 9:52 am, after recording himself and getting off his vehicle, he surprised and fired with a shotgun he possessed at soldiers guarding the National War Memorial on the outskirts of Parliament. One soldier was killed and two others were injured.

Picture of Michael Zehaf-Bibeau getting out of his car: 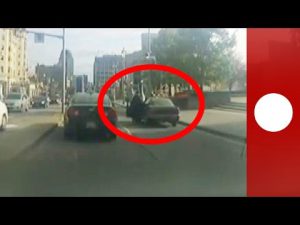 About eight minutes later, at 10:00 am, he continued running towards the Parliament building, on the way he hijacked a car with which he drove towards Parliament. In a video taken from a nearby car, a man fitting the description of the terrorist appears to be driving the car after the license plate has been removed. He entered the Parliament building while firing, he became entrenched until around 10:45 he was shot and killed by Sergeant-At-Arms Kevin Vickers and RCMP Constable Curtis Barrett. The whole incident took about an hour.

A news report of the event:

The area schematic and the route of the attack: 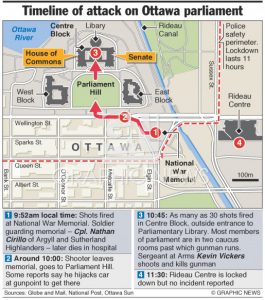 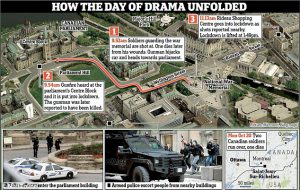 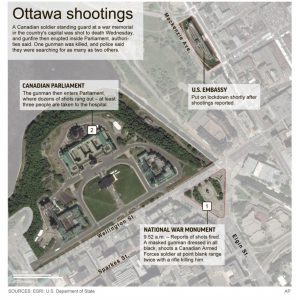 According to the data collected from security cameras deployed in the area and from testimonies from civilians and security personnel, it is possible to understand and explain the path Michael Zehaf-Bibeau chose and to explain the decisions he made from the viewpoint of the attacker:

There is no doubt that Michael Zehaf-Bibeau has planned the route in advance and did not improvise while on the move.

Michael Zehaf-Bibeau chose to come from the backside of the memorial to surprise the soldiers in the front, the first shooting’s result was a dead soldier and two wounded, indicates that the soldiers were surprised and did not respond with a counterattack.

Picture of the monument’s front and the soldiers: 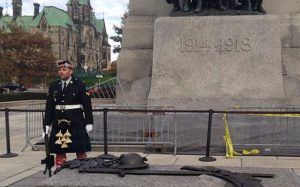 The timeline indicates that Michael Zehaf-Bibeau was at the memorial for about eight minutes (photographed) – if two soldiers remained wounded he did not appear to have verified their death by shooting them and, in addition, he chose to stay relatively long in the same place before deciding to continue advancing towards Parliament. He may have saved bullets for the continuation of the killing campaign and / or waited to see if there was a response from security forces following his first shooting.

Michael Zehaf-Bibeau standing at the front of the monument: 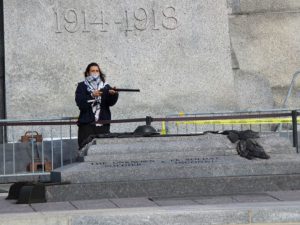 The fact is that Michael Zehaf-Bibeau managed to get into the Parliament building without any of the security personnel or the employees being able to stop him. At that point, security guards fired at him when some failed to hit him. A security guard testified that he had hit Zehaf-Bibeau but had not injured him, this did not keep him from moving forward.

In the end, fighting took place inside the Parliament building between Michael Zehaf-Bibeau and the security guards, who according to the testimony he fires about thirty bullets and absorbs many bullets, including one in the head that neutralizes and kills him – it should be noted that although they hit him with many deadly bullets. when they arrived, they decided to handcuff him.

Filmed documentation of a part of Michael Zehaf-Bibeau’s path:

Reconstruction of the attack:

Notice the behavior of the civilians in an event that they perceive as dangerous – at first one can see the citizens standing near the main road in the area of ​​the pedestrian entrance to the Parliament building, they hear the shooting from the direction of the monument and look towards it until the moment a vehicle that stops next to them and the gunman gets out from it. At this moment, the civilians run away and move away quickly. Factually, none of the civilians chose to take action against the terrorist to try and stop him. You can see that in the area of ​​the vehicle’s stopping point in the terrorist’s path towards the entrance to the Parliament building there is no security guard or police officer.
This is security at the entrance to the Parliament building.

The question arises: How is it possible for an armed person to reach a vehicle to the front of the building and even get on foot with no problem and without encountering any effective obstruction and / or resistance even though the level of alertness has risen to a moderate level? How is it possible that they did not raise the level of security of the parliamentary complex and did not increase further positions against the possibility of another attack that could occur?

The documentation of the fighting in the Parliament building:

The documentation shows that the Parliament building complex had relatively large security forces. The initial firing was also carried out at Michael Zehaf-Bibeau that failed to neutralize him and allowed him to continue to advance in the central corridor. The deployment of the security guards, guards and police officers inside the building, especially in the central corridor, the way some of them held and walked with their handguns and the fact that many did not draw their pistol even though there was combat in their vicinity indicates that they are unskilled and / or ready to deal with an incident of such characteristics.

In addition, this picture shows how the members of Parliament close the front door to a hall where they were at with furniture, one can learn that even the level of emergency preparedness inside the building is not high: 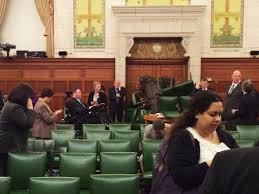 Despite raising the level of alert following a ramming attack two days ago, it is clear that Ottawa security forces did not translate the alert level into actual operations to elevate the security levels in the Parliament building complex which is probably designated as a particularly sensitive area. is at The highest level of difficulty in dealing with a single perpetrator who chooses when and how to carry out an attack and although Michael Zehaf-Bibeau meets this definition, given that he was known to intelligence in Canada and marked as a dangerous person, he should have been located and his flight from Montreal to Ottawa should have been stopped.

It can be stated that the lack of response from the security forces already at the time Michael Zehaf-Bibeau remained in the monument for about eight minutes, allowed Zehaf-Bibeau to realize that he could continue to implement his plan which included advancing and entering the Parliament building itself. The photograph shows that civilians in the area heard gunshot sounds from the direction of the monument and even responded with great caution. Could it be that civilians realized that a shooting incident was taking place and the various security forces stationed at the compound were not? I think the answer to this is negative and I am sure some security forces did hear the shooting but did not respond to it as required. If the time he remained in the monument was insufficient for the security forces to prepare for a response, then it was clear that as he progressed toward the Parliament building that some security force was expected to reach him and engage him until he was neutralized. Obviously, Michael Zehaf-Bibeau did not intend to harm civilians and to show that no civilian was shot by him despite him having had several opportunities to do so. It seems to me that Michael Zehaf-Bibeau did not believe how easily he was able to get into the Parliament building and he did not think he could get that far without being hurt, arrested, or killed.

If, until that day, the Ottawa Parliament complex had a security plan in place, it is undoubtedly not adapted to the level of the alert set and the relevant threats.

A security force that is expected and relied on to secure the Parliament compound should be able to reach a single terrorist shortly after the attack begins and surely prevent it from reaching the front of the building and entering it.

Remember that security must be maintained in accordance with a professional security program that is carried out with skilled personnel!